A few months ago I discovered the Nike+ FuelBand and couldn't really decide if it's something I would need, but then finally bought it to find this out. I've been using the Nike+ FuelBand for several weeks now and want to share my impressions with you: 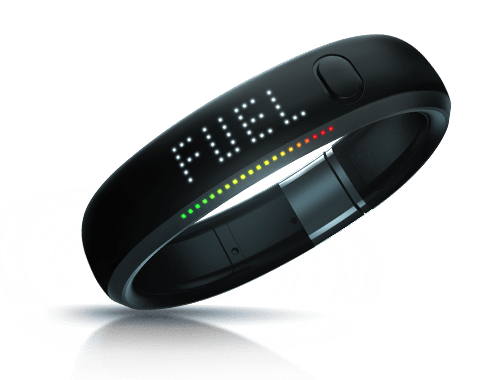 The initial setup is very easy. I just needed to install the Nike+ Connect app and plug the Nike+ FuelBand into the USB port of my computer. I could change a few basic settings (like on what wrist I want to wear it or the daily goal) and it was ready to use. The setup with the Nike+ FuelBand app for iOS is similarly simple, basically you almost just need to push the button on the Nike+ FuelBand for a few seconds.

The Nike+ FuelBand works great. The build-in battery is small, but lasts one to two weeks and can be completely recharged in under a hour via USB. The activity is measured in a unit called Nike+ Fuel, which is relative to you body height and weight. One Nike+ Fuel point is one up- and down-movement of your arm. Syncing with the Nike+ website is as simple as the setup. Just plug it into the USB port on your Computer or press the button on the Nike+ FuelBand and it syncs over Bluetooth with the iOS app.

Graphs showing your activity over the days, weeks and months are useful to recognize trends. Streaks (consecutive days of reaching your daily goal) and achievements really helped me to get more motivated to be active.

The Nike+ FuelBand does well what it's designed to do. The precision of its measurement is limited, because the Nike+ FuelBand itself is naturally limited to movements on just the one arm where you wear it and so movements of the other arm or the legs aren't counted. Nevertheless it's very helpful to get a rough estimate of your daily activity and motivates you to be more active. While the Nike+ FuelBand is great, it isn't cheap. So depending on how much you want it, I would recommend you to wait until maybe it gets cheaper or Nike releases an app with similar features.

Update: You don't need a Nike+ FuelBand anymore, your iPhone 5S or newer is enough. The app got updated to enable this features for everybody and is now called Nike+ Fuel.